Make it Yourself - Tips for Meringue Pie Topping


Here is a good recipe for meringue for pies. 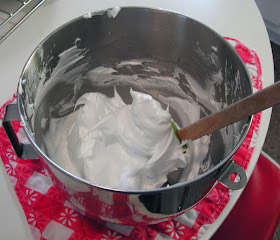 3 egg whites at room temperature
¼ teaspoon salt
¼ teaspoon Cream of Tartar
6 Tablespoons sugar
1 ½ teaspoons cornstarch
Preheat oven to 325°. In large mixer bowl, beat together egg whites, salt and cream of tartar until soft peaks form. Slowly add the sugar (one Tablespoon at a time).  Beat until stiff peaks form. Sprinkle the cornstarch over the egg whites, just before they are done. The peaks should not fall over when the beater is lifted.
Spread over the warm filling being sure to get to all the edges of the crust. Then fill in middle. Bake 15 to 18 minutes until the peaks are golden brown.
Myrna
Share

Hi...we'd love to hear from you.
Comments are moderated before appearing...Thanks.