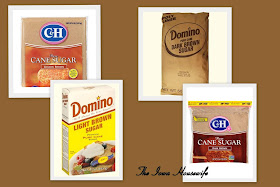 Brown sugar has a long history, as it is the earliest recorded sugar used. It has been grown all over the world, and reached a popularity peak in the 1700s with the rise of Atlantic sugar plantations. It comes in several types, and while it originally was an unfinished form of refined sugar, now it is more often created by adding molasses to white sugar (for better consistency). It has almost identical food properties to white sugar, but adds a molasses-like flavor to foods.Types of Brown Sugar
The Four Main Types of Brown Sugar are listed below
1. Dark, golden (yellow) and light
These are the brown sugars most often found in grocery stores and used for everyday consumption.
2. Demerara
This unrefined medium-brown sugar is named for the Demerera region of Guyana, South America, where it originated. Sugarcane juice is boiled until the water evaporates, leaving behind sugar crystals that contain molasses, which are then spun in a centrifuge to remove more moisture.
3. Muscovado
This is an unrefined, very dark brown sugar with a strong molasses flavor.
4. Turbinado
A light colored, crystalline brown sugar, turbinado is made from sugarcane juice that has been heat-evaporated then crystallized.
How To Store Brown Sugar
Brown Sugar should be kept in an air-tight container. This will help retain its moisture content. When left open to air, brown sugar may harden as the moisture in it slowly evaporates out.
A trick – you can soften up the hardened brown sugar by adding a bread slice or an apple wedge to the container and then sealing it tightly.
You can make your own brown sugar using this recipe. I haven’t tried it myself as brown sugar is on sale so often and I find it works just fine for me. I do use light brown sugar unless the recipe calls for the dark brown which I think is quite strong flavored.
Recipe for brown sugar
Light brown sugar from white sugar and molasses: Measure 1 cup of granulated sugar and 1 tablespoon of molasses into a mixing bowl. Stir with a fork until completely mixed. If you want a darker brown add more molasses a little at a time till it is the flavor and color you want.
Myrna
Share

Hi...we'd love to hear from you.
Comments are moderated before appearing...Thanks.